The Hector’s Dolphin deaths of a juvenile and adult female at the top of the South Island in New Zealand in January 9th and 11th, 2015 are a stark reminder of the silent slaughter that continues to plague the worlds smallest and one of the rarest dolphins in the world. 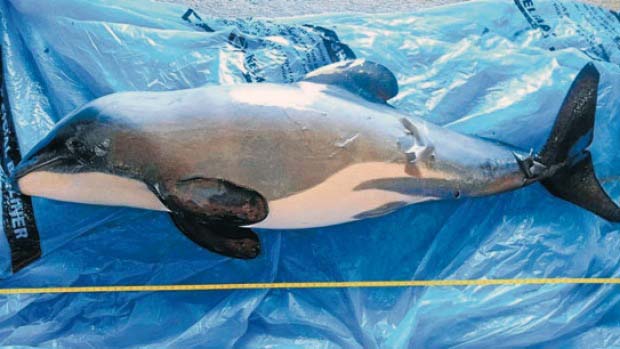 This silent slaughter of Hector’s Dolphins has been documented for decades, with insufficient protection to halt their demise. To ban set nets in the habitat range and up to the 100m depth contour has been researched to be the most efficient way to stop the decline of the Hector’s Dolphin and to stop dangerous fishing activities.

But the area in which these dolphins were found had no legislative protection, and similar deaths have been occurring throughout New Zealand’s coastline. The geographic location of Hector’s Dolphins in the Tasman Bay area are one of the most logical departure points from the South Island to breed with the critically endangered Maui Dolphins of the North Island, who are also plagued by a lack of protection from set nets. Since the introduction of monofilament nets in the 1970’s, the Hector’s Dolphin population of New Zealand’s South Island have plummeted from 30 000 to an estimated 4000 – 6000 (although current records are data deficient and the numbers could be lower).

These tens of thousands of Hector’s Dolphins are part of an unmanaged slaughter due to the lack of political will to legislate for survival. The Taiji dolphin hunt is a carefully managed slaughter and according to Sea Shepherd Cove Guardian and Hector’s Protectors Director Troy Coyle, campaigning in Taiji is an effort to ensure the world knows about the dolphin hunt and that “similarly, the world needs to know about the plight of the Maui and Hector’s Dolphin which are not getting adequate protection”.

The Ministry of Primary Industries promotes ‘good netting’ practice of net removal if a dolphin is seen, and no nets are to be set in known dolphin habitat areas – which are too often ignored and unenforced. The Department of Conservation, in response to the recent deaths in Tasman Bay, has urged fishers and boaties to take more care with set nets, which Sea Shepherd New Zealand Director, Michael Lawry believes is “like asking a Japanese whaler to be careful with a harpoon”.