With marine plastic pollution having devastating consequences on oceans and coastlines around the world, Sea Shepherd Australia is shining a light on how this increasing environmental issue is affecting mainland Australia.

Over seven tonnes of marine plastic pollution was removed by ten volunteers from Sea Shepherd Australia and Indigenous Rangers from the Dhimurru Aboriginal Corporation in a two-week-long collaboration at Djulpan Beach in the Northern Territory.

During the campaign, Sea Shepherd conducted scientific surveys across the 14-kilometre stretch of beach in collaboration with marine plastic pollution expert Dr Jennifer Lavers. Findings from the surveys concluded that there were an estimated 250 million pieces of marine debris present.

So remote and untouched by human contact is Djulpan Beach, Rangers cut a 4WD track from the nearest road to allow access for vehicles and equipment.

The volume and density of plastic pollution removed from Djulpan was at a scale that the Sea Shepherd volunteers had not seen before on a mainland Australian beach, despite having facilitating over 600 clean-ups in the past three years.

Around 4.5 tonnes of the debris removed were consumer items including:

In many cases, the plastic items were so degraded that when volunteers went to pick them up, they crumbled into plastic dust.

The remaining 2.5 tonnes was made up of 72 different types of discarded fishing nets or ghost nets, some of which contained turtle bones.

Hundreds of plastic items were found with multiple animal bites, including those from fish and turtles.

Much of the trash found along Cape Arnhem originates from ocean currents and trade winds above Australia that pushes the debris into the Gulf of Carpentaria in a clockwise direction before washing ashore.

Djulpan is a remote beach on the shores of the Gulf of Carpentaria. Far from any town or city, it is a culturally significant place for the Yolngu people and an important nesting ground for turtles.

Six of the seven species of marine turtles which are all listed as ‘Vulnerable’ or ‘Endangered’ under the Environmental Protection and Biodiversity Conservation (EPBC) Act can be found on Djulpan. 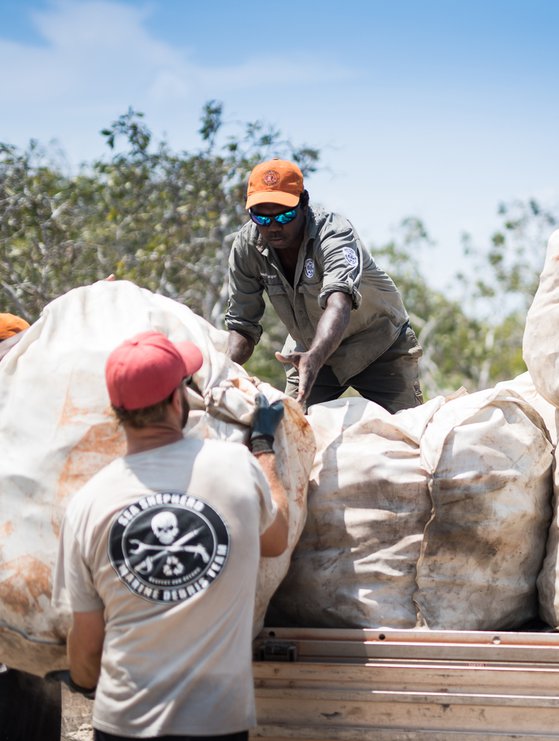 In October 2019, our volunteer Sea Shepherd crew returned to Djulpan as we commenced the next stage of our onshore marine debris campaign with Rangers from the Dhimurru Aboriginal Corporation. Once again, our aim was to work together to remove as much plastic debris as possible to ensure that marine life on this coastal area is safe from the devastating impacts of plastic.

If you would access to marine debris data from our last clean-up at Djulpan, please email ssmarinedebris@seashepherd.org.au.

“The marine debris littering our beaches saddens us. Not only is it killing our turtles and other marine life, it also pollutes some of our sacred areas. The rangers work hard to try and keep the beaches clean, but we need to stop the rubbish going into the ocean in the first place.” -- Managing Director of the Dhimurru Aboriginal Corporation Mandaka Marika.

About our Marine Debris Campaign

Our Sea Shepherd Australia Marine Debris Campaign is committed to promoting and facilitating family-friendly coastal and river clean-up activities and inspiring the community, businesses and industry to take action in support of the protection and conservation of local marine environments.

Since 2016, our passionate volunteers have removed over 2.6 million pieces of trash from polluting our oceans.